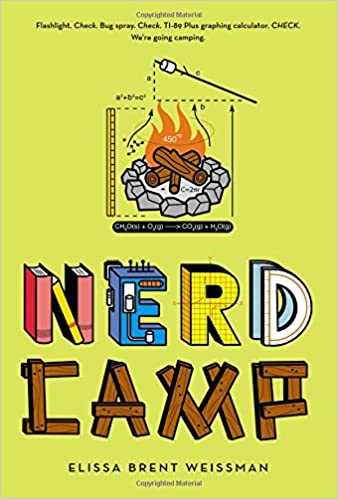 Ten-year-old Gabe has just been accepted to the Summer Center for Gifted Enrichment. That means he’ll be spending six weeks at sleepaway camp, writing poetry and perfecting logic proofs. S.C.G.E. has been a summer home to some legendary middle-school smarty-pants (and future Jeopardy! contestants), but it has a reputation for being, well, a Nerd Camp. S.C.G.E = Smart Camp for Geeks and Eggheads.

But is Gabe really a geek? He’s never thought about it much—but that was before he met Zack, his hip, LA-cool, soon-to-be stepbrother. Gabe worries that Zack will see him only as a nerd, until a wild summer at camp—complete with a midnight canoe ride to “Dead Man’s Island”—helps Gabe realize that he and Zack have the foundations for a real friendship.

This clever, fun read from Elissa Brent Weissman is full of great minor characters (like a bunkmate who solves math problems in his sleep) and silly subplots (like the geekiest lice outbreak ever). Adjust your head-gear, pack your camp bag, and get ready to geek out!